Iraqi Shiite militia groups backed by Iran appear to have acquired and even built increasingly more lethal missiles and rockets in recent years. This potentially give them the capability to strike their adversaries at much greater distances than ever before.

The TOS-1 is a truly lethal weapon. The Iraqi Army has six in its arsenal. 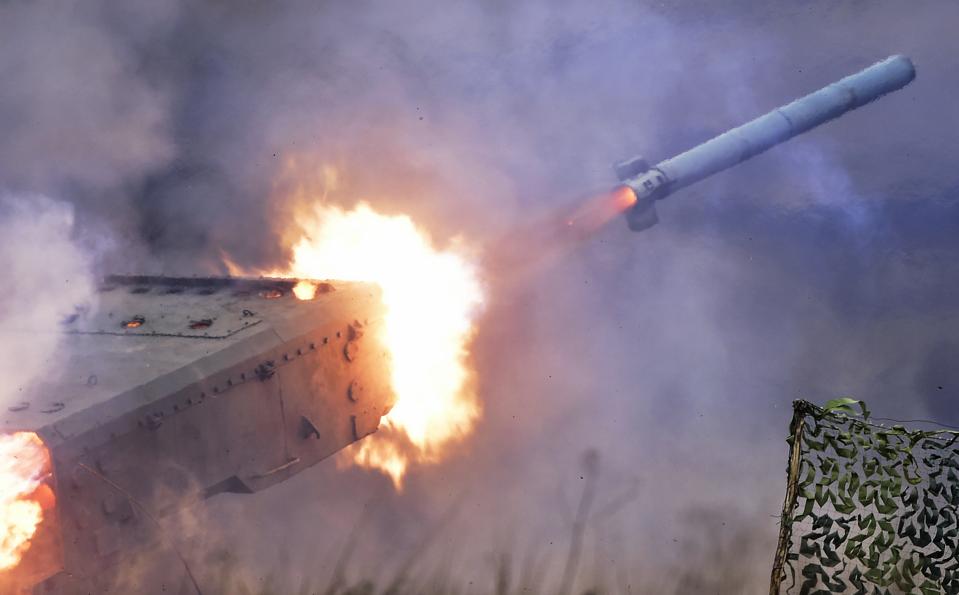 The system, which is mounted on a T-72 tank chassis, can fire 24 thermobaric rockets containing flammable chemicals that rain down on an area approximately 200 by 300 meters wide. The use of such rockets in an urban area would be utterly devastating.

However, there is a huge amount of doubt and skepticism among analysts that this particular group actually possesses a TOS-1. It’s much more likely that Ashab Al Kahf was actually flaunting Iranian-built artillery rockets that Shiite militias in Iraq are known to possess.

The anti-American militia officially denies that it’s backed by Iran. According to Iraq expert Michael Knights, however, this denial is likely part of a ploy to enable Tehran and its more powerful armed proxies in Iraq to maintain plausible deniability over certain attacks Ashab Al Kahf might carry out.

While such groups may exaggerate their capabilities, Iran-backed militias in Iraq have undoubtedly built-up significant Iran-supplied stockpiles of increasingly sophisticated rockets and possibly even short-range ballistic missiles.

If such a relatively unknown group like Ashab Al Kahf possesses such destructive rockets, what do the much more powerful and well-established militia groups have in their arsenals?

An August 2018 exclusive Reuters report, which cited unnamed Iraqi and Western intelligence sources and a senior Iranian official, revealed that Iran transferred short-range ballistic missiles (SRBM) to its militia allies in Iraq. The Iranian official said the number of those missiles were not high but could be increased if Tehran deemed it necessary.

Also, Iranian advisors have sought to give Tehran’s Iraqi militia allies the capability and knowhow to build rockets themselves. One outcome of this project was the unveiling of Iraqi-built rockets in the Iran-backed Badr Organization’s arsenal last July. Those particular rockets are comparable to unguided Iranian-built Naze’at and Zelzal rockets. 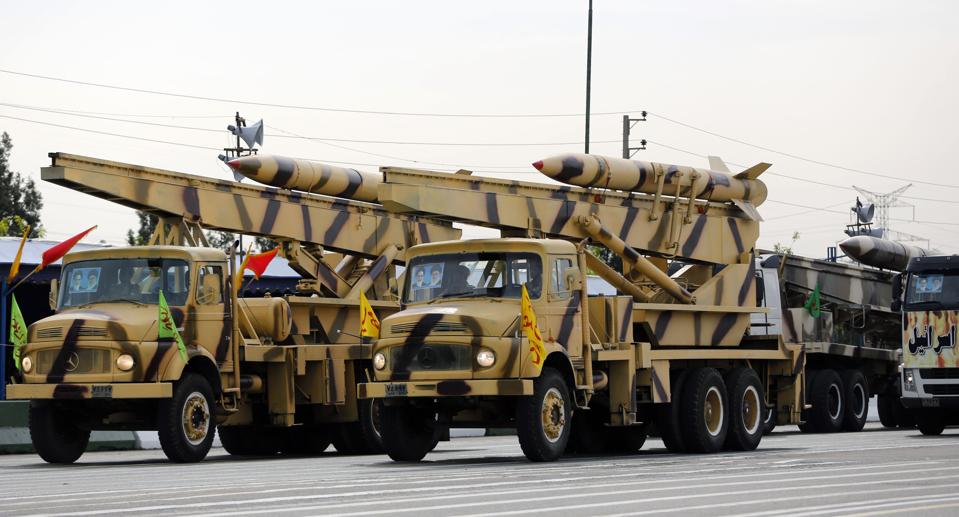 Iranian Zelzal missiles at a parade in Tehran. In recent years, Iran has helped its militia proxies in Iraq to locally build a variant of these surface-to-surface missiles. (Photo by ATTA KENARE/AFP via Getty Images)

The reported transfer seemingly followed the same patterns as past Iranian efforts to build-up the missile arsenals of its non-state allies in the Middle East, most notably Hezbollah in Lebanon, which has amassed a large stockpile of increasingly accurate long-range missiles, as well as the Houthis in Yemen.

“It is also widely accepted that [Iraqi] militias have developed a line of communication and control to Iran through Diyala, allowing them to import missiles and equipment without government approval or knowledge,” noted a 2019 Washington Institute analysis. “For example, artillery rockets may already have entered Iraq inside empty water or oil tankers, a tactic also used in Yemen.”

“If so, Iran’s playbook suggests that SRBMs and/or precision guidance systems could soon follow.”

Supplying Iraqi militia allies with the missiles capable of accurately striking U.S. bases in the Persian Gulf and even Israel could well prove strategically beneficial to Tehran in the event of a major war with these adversaries.

For now, these groups are seemingly sticking to using more basic short-range rockets like the Katyusha, which they’ve used in multiple attacks against U.S. bases across Iraq and the U.S. embassy in the Green Zone compound in Baghdad. The most recent such attack was on Nov. 17 when four Katyusha rockets struck the Green Zone.

These attacks are clearly aimed at maintaining pressure against the U.S. troop presence in Iraq.

After one such attack killed an American civilian contractor at the K1 base in Kirkuk in late December 2019, the U.S. promptly retaliated with a series of airstrikes against the powerful Iran-backed Kataib Hezbollah group. Shortly after that, in early January 2020, a U.S. drone strike killed both Soleimani and Kataib Hezbollah leader Abu Mahdi al-Muhandis in Baghdad. In response, Iran fired ballistic missiles at two airfields hosting U.S. troops, the large Al-Asad airbase in Anbar and Erbil International Airport in the Iraqi Kurdish capital. Those missile strikes seemingly sought to avoid actually afflicting casualties on U.S. personnel since that could have sparked an all-out war. Nevertheless, many U.S. troops in Al-Asad did suffer brain injuries.

In late September, U.S. Secretary of State Mike Pompeo threatened to close the U.S. embassy in Baghdad unless Iraq did more to combat militia rocket attacks against U.S. personnel. The threat did not include closing the U.S. consulate in Erbil. Shortly after Pompeo’s threat, six militia rockets were fired toward Erbil International Airport from Iraq’s Nineveh province. The nature and timing of the attack strongly suggested that Iran and its militia proxies wanted to signal to the U.S. that its troops wouldn’t be safe anywhere in the country, including within the boundaries of the relatively secure and stable autonomous Kurdistan region.

The rocket’s crash site was also near a base belonging to the Iranian Kurdish KDPI opposition group, possibly suggesting the attackers were sending two messages or threats in a single strike. While the attack did not kill or wound anyone, which was most likely by design like those January strikes, it did unequivocally demonstrate for the first time that these militias possess rockets that can strike Erbil with notable accuracy.

The above-mentioned Nov. 17 attack on the Green Zone came shortly after the U.S. announced it would reduce the number of its troops in Iraq from 3,000 to 2,500. It was the first attack since Iran-backed militias, including Kataib Hezbollah, offered a temporary truce in mid-October that included halting all rocket attacks provided U.S. troops withdrew in an “acceptable timeframe.”

It now seems these rocket attacks will once again become common occurrences. If the situation deteriorates into another confrontation, the U.S. military may well find it will have to contend with much deadlier rockets than it has hitherto from these militias thanks to their patron in Tehran.

This article was written by Paul Iddon from Forbes and was legally licensed through the Industry Dive publisher network. Please direct all licensing questions to legal@industrydive.com.