B-52 is a remarkable system, but it has a radar signature similar to the Chrysler Building.

March was an unusually active month for the Air Force’s B-52 bomber. The Air Force’s iconic long-range strike aircraft conducted training exercises and flights intended to deter aggression in the South China Sea, off the Kamchatka Peninsula in Northeast Asia, in the Baltic region and in the Mediterranean.

No other aircraft in history has managed to combine the reach, lethality and longevity of the B-52. The Air Force disclosed last year that it intends to gradually retire its newer B-1 and B-2 bombers as the next-generation B-21 becomes available, but it will keep B-52s in the force through 2050.

That would mark nearly a century of continuous service for the B-52, which joined the fleet in 1955 and ceased production (after producing 744 planes) only seven years later. The plan is to install new engines on the 77 B-52s still in the force and equip them with improved, long-range cruise missiles that can penetrate increasingly capable enemy air defenses.

Therein lies the B-52’s most significant deficiency: it can’t penetrate modern air defenses without running a severe risk of being shot down. The plane has a huge radar cross-section—so huge that even jamming of relevant frequencies might not be sufficient to mask its location. By 2050, the Chinese will likely be able to track its movements continuously from space.

So unless the B-52 is bombing low-end adversaries who lack air forces and air defenses, it will have to stand off hundreds of miles from intended targeted and let its cruise missiles perform the most dangerous part of the mission. If the target is an enemy city, that’s not a problem. Cities don’t move. But if the target is a time-sensitive, mobile asset like a Chinese wheeled missile launcher, it’s a big problem.

Although there are ways of remotely tracking mobile ground assets even in the midst of a nuclear exchange, the Air Force needs a bomber that can penetrate the densest air defenses in pursuit of high-priority targets. That will be the job of the B-21 bomber being built by Northrop Grumman. The super-secret B-21, known as the Raider, will be the most survivable long-range strike aircraft in history. 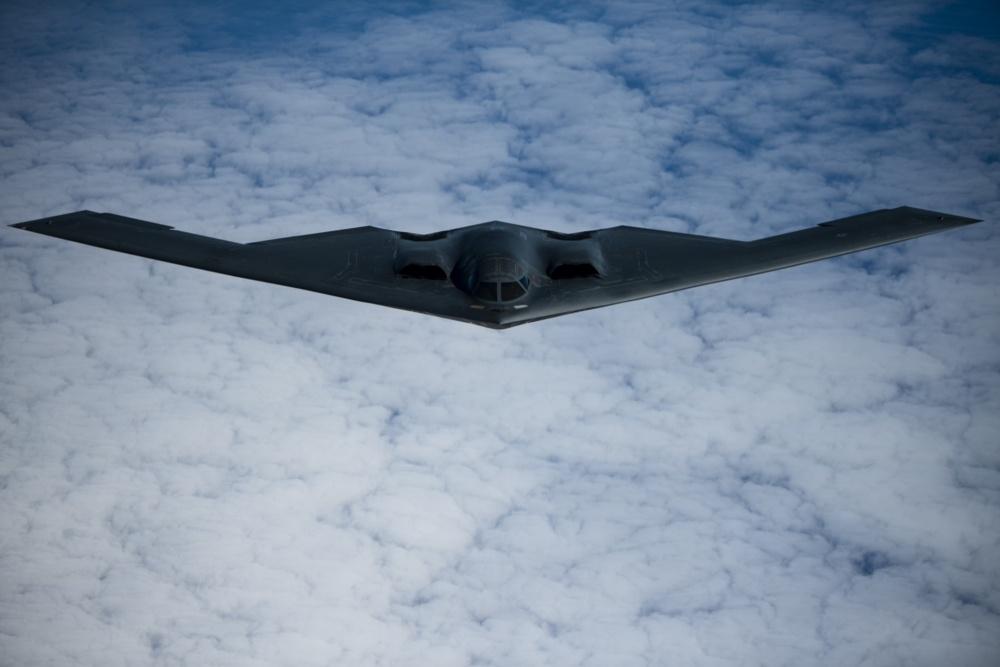 The B-21 bomber probably resembles the configuration of this B-2. Note how different it looks from the B-52 — mainly because of its need to penetrate air defenses.

Raider fits quite nicely with the renewed emphasis of national defense strategy on near-peer threats, meaning China and Russia. Those are the countries with mobile ICBM launchers, deeply buried command posts and other assets that a standoff weapon launched from a B-52 might have trouble taking out. The goal of the B-21 effort is to assure that any type of target can be held at risk by U.S. military forces, no matter where in the world it is located.

That’s how deterrence works. If you want to discourage an enemy from committing aggression, you have to convey the message that there is no way to escape retaliation. Chinese and Russian leaders need to know that launching a nuclear attack against America will be suicidal, because they personally are sure to suffer retribution. Non-nuclear aggressors like Iran need to know that everything they hold dear is at risk if they attack their neighbors.

To make that threat real, a long-range, penetrating aircraft that can’t be intercepted is essential. Raider is the only program the U.S. has under development with the survivability, reach and lethality to accomplish that goal in all circumstances. So the program must be kept on track. Thus far, it seems to be progressing well. The Air Force prepared carefully for its development, and last year the program successfully completed its critical design review.

If past experience is any indication, some issues will crop up in development. But the Air Force must have B-21, because the rest of its bomber fleet won’t be able to address many of the challenges planners foresee after 2030 (roughly the year Raider becomes operational in the force). There is no Plan B, and the Air Force has done everything it can to anticipate problems—including adapting hardware from successful programs like the F-35 fighter and prototyping new components well in advance of system integration.

The one thing that could go wrong in a big way is that there is a sudden cut in the defense budget forcing the Air Force and other services to pare their modernization plans. When funding falls, modernization is usually the first area to suffer, and sometimes the tradeoffs that must be made are really difficult. For example, the Air Force might have to choose between continuing B-21 production at an economical rate, and expeditiously reengining the B-52.

Hopefully that scenario will not arise. But with budget deficits projected to exceed a trillion dollars annually in the years ahead, it could. A rise in interest rates or economic recession might force the Pentagon to tighten its belt. If that occurs, it is more important to keep the B-21 moving ahead at a steady pace than it is to reengine B-52 rapidly. The reason is simple: B-21 can do everything the B-52 can, but B-52 cannot do everything the B-21 can. If the Air Force is to deter across the entire spectrum of conflict from threatening insurgents to holding high-end strategic targets at risk, then B-21 has to be the higher priority.

In fact, B-21 will likely end up being the only airframe in the heavy bomber fleet over the long run, because even with new engines B-52 can’t fly forever. As threats grow more serious, the ability to operate against near-peer adversaries even from standoff ranges will become doubtful, underscoring the need for a long-range strike aircraft that can’t be tracked with any known combination of sensors. Only B-21 meets that requirement.

One thing we don’t need is for Pentagon budget analysts to advance specious arguments about why old bombers are cheaper to operate than new ones. Everyone recognizes that B-52 is a bargain compared with other ways of addressing recent threats, but recent threats have not been particularly challenging. The world is changing in ways not favorable to U.S. military forces. We need a bomber that can address all threats under all circumstances, and there is only one option for meeting that need.

At least two companies working on the B-21 bomber contribute to my think tank and/or are consulting clients. The details of their involvement are secret.

tags: featured
previous India can blow up satellites now. And a new space arms race could be starting.
next Russia Recently Flew a Spy Plane Over Area 51
Related Posts