It’s no secret that that Pentagon has a new, island-hopping war plan. One that could help it to roll back Beijing’s land-grabs in the China Seas.

On Sept. 20, the U.S. Marine Corps and U.S. Navy showed off one tactic that could be critical to the plan. Marines slipped ashore on an uninhabited island near Guam. They picked a target on a military bombing range and relayed the coordinates to a Navy cruiser.

Minutes later, a Tomahawk cruise missile slammed onto the range.

The live missile exercise was part of Valiant Shield 2020, a sprawling, 12-day naval war game that played out around Guam. At least 11 warships including the aircraft carrier USS Ronald Reagan and the assault ship USS America played, as did more than 100 aircraft including U.S. Air Force F-22 stealth fighters and B-1 bombers.

The climax of the exercise was the dramatic sinking of the decommissioned Navy frigate Curts. Reagan’s Carrier Air Wing 5 attacked the frigate, as did the cruisers Antietam and Shiloh and the submarine Chicago.

The next day, Antietam aimed its arsenal at Farallon de Medinilla, an American-administered island of .3 square miles that’s part of the Commonwealth of the Northern Mariana Islands. 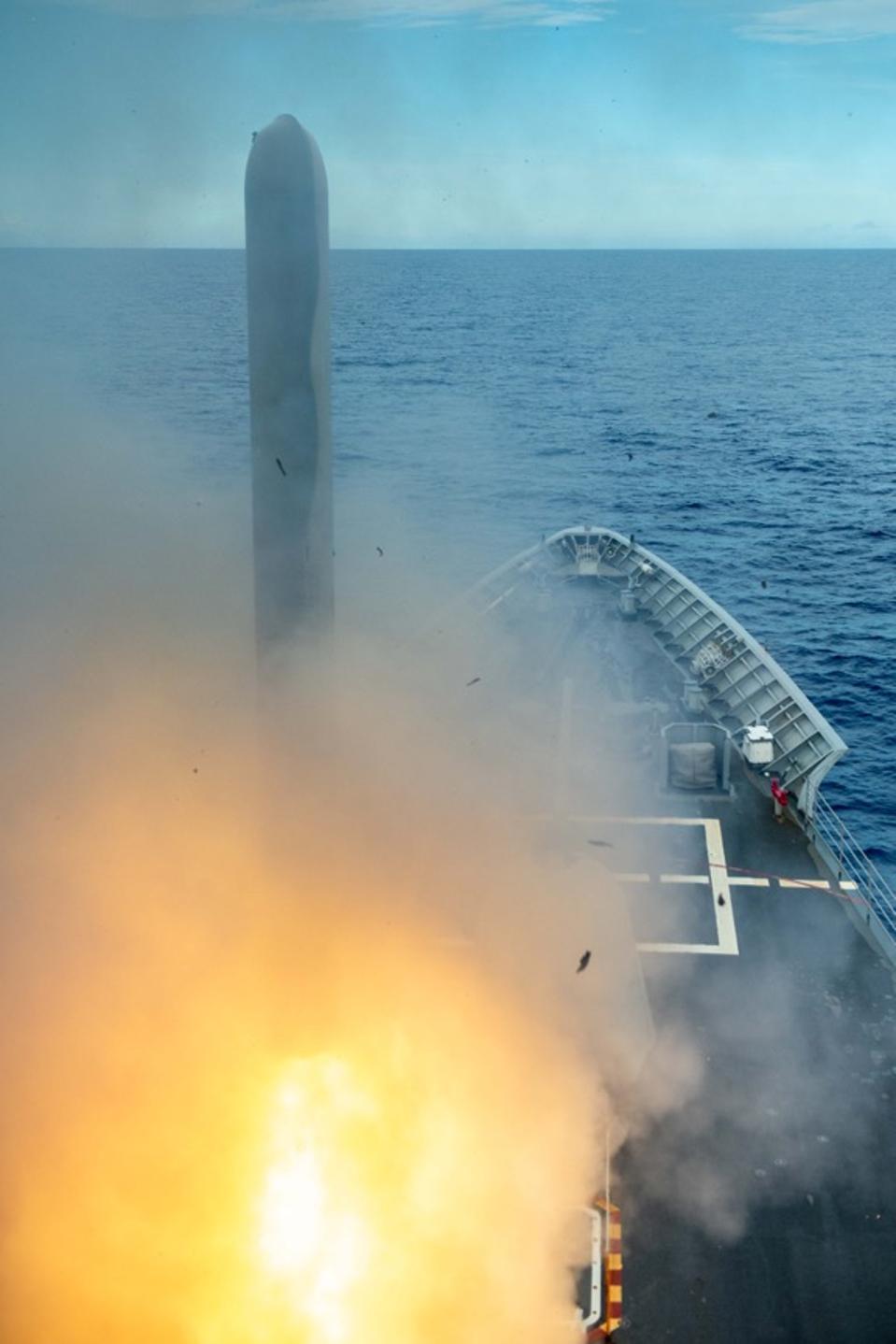 The combination of Marines, warships and cruise missiles is about to get a lot more important. Marine commandant Gen. David Berger is reorganizing the Corps’ expeditionary units to make them lighter, more survivable and more relevant in island-hopping warfare.

The Marines are eliminating all of their law-enforcement battalions, tank battalions and bridging companies. The Corps also is disbanding three of its 24 infantry battalions, 16 of its 21 tube-artillery batteries and two of its four amphibious-vehicle companies.

Four aircraft squadrons face the axe—two flying attack helicopters and one each with tiltrotors and heavylift helicopters. The Corps also wants to squeeze some F-35 squadrons, reducing their complement of stealth fighters from 16 planes to 10.

With all those thousands of billets Berger is freeing up, he’s setting up three Marine Littoral Regiments, all of them in the Pacific region. The first regiment will include around 2,000 Marines drawn in part from an infantry battalion currently stationed in Hawaii.

The MLRs are missile-armed island forces. The regiments will ride across the Pacific in the new stern-landing assault ships the Navy is developing then roll onto small islands in Joint Light Tactical Vehicles armed with 100-mile Naval Strike Missiles and High-Mobility Artillery-Rocket System launchers firing their own anti-ship missiles.

The regiments also could operate land-launched Tomahawks. With its thousand-mile range, the TLAM is in a category all its own.

But the dire constraints of long-range, open-ocean logistics might limit just how many heavy missiles a regiment can haul over the beach. Which is why it’s so important for the Corps to practice feeding targeting data to Navy crews.

Isolated Marine regiments holding onto remote islands deep inside the China Seas might need the fleet’s firepower to give them a fighting chance at survival … and victory.

tags: featured
previous Russia Uses ‘Swarm Of Drones’ In Military Exercise For The First Time
next Army Leaders Want to Keep Pace with Diversity in Changing US Population
Related Posts