Large-deck, nuclear-powered aircraft carriers are the signature expression of American military power. They enable U.S. warfighters to sustain devastating air attacks against hostile forces on land or at sea for months at a time, precisely hitting hundreds of targets each day. And unlike some other combat systems, they don’t need access to bases ashore to accomplish their missions.

The fearsome power of America’s aircraft carriers makes them a potent tool for deterring aggressors without needing to rely on nuclear weapons. However, it is a common refrain among military analysts that our carriers are becoming vulnerable as long-range, anti-ship missiles proliferate around the world. For instance, Sydney Freedberg of Breaking Defense—one of the most respected journalists covering the military—observed in a March 12 budget analysis that “Beijing’s growing arsenal of precision-guided missiles seems increasingly able to find and cripple a thousand-foot-long flattop.”

No doubt about it, U.S. aircraft carriers are big. In addition to being over 1,000 feet long, they are as tall as a major office building (they have 25 decks) and their flight decks measure over four square acres. However, Navy leaders believe carriers are more survivable now than they were during the Cold War, and are steadily becoming less vulnerable to attack. When you consider all the provisions that have been made for protecting the ten carriers currently operating in the U.S. fleet, it is easy to conclude they might be the safest refuge to seek in a major war. Here are ten reasons why.

Deployed carriers are always moving. And they are moving fast—fast enough, in fact, to outrun most submarines. Because they can sustain speeds of 35 miles per hour, the Nimitz-class carriers populating the current fleet can move to anywhere within a 700-square mile area within 30 minutes. After 90 minutes, that area grows to over 6,000 square miles. So finding a carrier isn’t the same thing for enemies as successfully targeting it. By the time their weapons arrive, it will likely be gone. 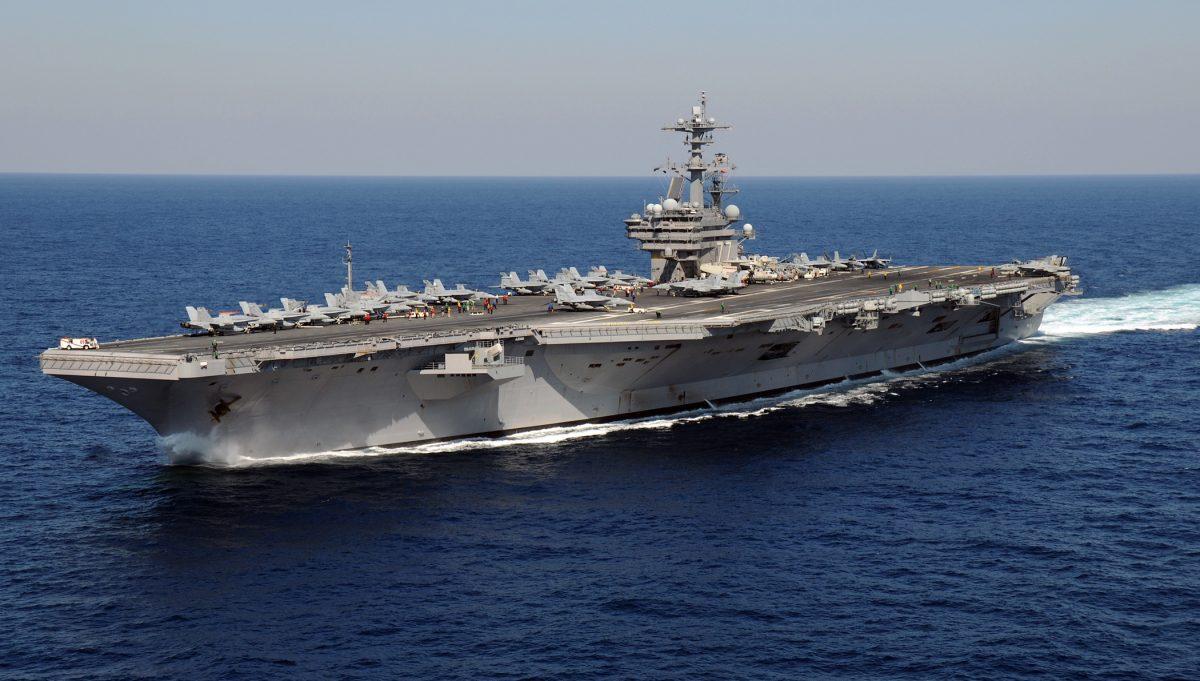 The aircraft carrier USS George H.W. Bush operating in the Atlantic. The Bush was the last vessel in the Nimitz class, a transition ship to the next-generation Ford class of more capable carriers.

U.S. carriers have unlimited range. Despite their huge size, Nimitz-class carriers and the Ford-class carriers that will replace them are unlimited in their reach thanks to nuclear propulsion. Their operations will not be disrupted if fuel tankers servicing the rest of the fleet are intercepted. Nuclear power enables the carriers to execute deceptive maneuvers in any direction for any duration, far exceeding the range of most hostile forces struggling to find them.

Carrier air wings can destroy enemy combat systems before they get near. A typical carrier air wing contains dozens of F/A-18 and F-35 fighters equipped with sophisticated sensors and precision-guided weapons. It will also contain radar planes that can see threats hundreds of miles away, and “Growler” electronic warfare aircraft capable of jamming enemy radar and communications. These airframes greatly outclass the forces they will be facing, and can intercept attackers long before they get within targeting range of a carrier.

Carrier sensors are netted with other friendly assets. The Navy has spent decades figuring out how to connect all of its scattered warfighting assets into a single integrated network. So deployed carriers won’t just be relying on their organic sensors to detect threats; they will receive continuous information from surface and undersea warships, from manned and unmanned aircraft, and even from orbiting reconnaissance satellites. Not only will the carrier have detailed awareness of potential dangers, but it will be able to use weapons on remote warships to intercept threats that may be beyond the reach of its on-board systems.

Carriers never deploy alone. Whether they are traveling to the Western Pacific or the Persian Gulf or the North Sea, U.S. carriers never deploy without escorts. These included multiple surface combatants equipped with the world’s most advanced air and missile defenses, plus nuclear-powered attack subs that are unsurpassed in their ability to find and destroy hostile warships on or under the sea’s surface. The surface warships are being upgraded with a new generation of weapons for intercepting overhead threats and a radar a hundred times more powerful than the legacy system. The submarines are continuously improved to stay ahead of undersea rivals such as the Russian navy.

Carrier defenses are layered to provide in-depth protection. Carrier strike groups arrange their defensive perimeters in layers that reach out hundreds of miles, so that any enemy seeking to get within targeting range must overcome multiple hurdles. That applies to hostile missiles, manned aircraft, submarines or any other potentially threatening system. The virtue of layered defense is that no layer needs to be perfect to protect the carrier. For instance, if each of three layers is 80% effective, the number of successful penetrators (.2 times .2 times .2) would likely be less than one in a hundred.

Carriers are nearly impossible to sink. Because of their vast size, U.S. aircraft carriers have hundreds of water-tight compartments. They also have thousands of tons of armoring, and redundancy built into major on-board systems such as the electrical wiring. So that one weapon that might penetrate a layered defense isn’t likely to do great damage to the carrier. The vessel won’t sink, and the crew will probably be able to work around whatever damage is incurred to continue performing their mission. The size of the carrier that some pundits fear makes it vulnerable to attack actually makes it more resilient than any other warship.

Carriers have extensive on-board defenses. In addition to the “passive” defenses mentioned in the previous paragraph, each carrier is equipped with active defenses that include multiple air defense radars, surface-to-air missiles, automated guns for dealing with sea-skimming threats, electronic warfare systems for deceiving the sensors and disrupting the command links of incoming threats, and an anti-torpedo system. The Navy has decided to eliminate the anti-torpedo system, but the other organic defensive systems on U.S. carriers are diverse and highly effective.

Secrecy complicates attack plans. Navy insiders say that many of the defensive features incorporated into U.S. carriers are never publicly disclosed. That means that any plan to attack a carrier involves guesswork about what countermeasures might have to be overcome. Aggressors are burdened with so many potential requirements for penetrating to the carrier that in most cases they will be deterred from even trying.

The Ford class of carriers will contain additional defensive advantages. The Navy has begun taking delivery of a new class of aircraft carriers providing even better protection than the already formidable Nimitz class which comprises the current fleet. For instance, the Ford class will provide over 600 megawatts of electricity to power on-board sensors, networks and warfighting systems. The added power may one day facilitate installation of high-power lasers, electromagnetic railguns, and other exotic weapons for which enemies currently have no counters.

So although nobody should doubt the sacrifices of sailors and aviators serving on America’s large-deck, nuclear-powered aircraft carriers, the danger of losing one to hostile action is modest and receding. You might be safer on a carrier in wartime than you would be in your hometown, which is far more vulnerable to a variety of aggressive acts.

Several companies involved in building and equipping U.S. aircraft carriers contribute to my think tank. At least one is also a consulting client.