In this image taken from video released by the Russia’s Federal Security Service taken from a Russian Coast Guard vessel purporting to show an incident between the Russian coast guard and a Ukrainian tugboat, in the Kerch Strait on Sunday Nov. 25, 2018. Russia said three Ukrainian vessels made an unauthorised passage through Russian territorial waters, while Ukraine alleged that one of its boats was rammed by a Russian coast guard vessel. (Russia’s Federal Security Service via AP)

Talk of war in the Crimea is no longer the preserve of military history enthusiasts. The cavalry charges and cannon fire of the 1850s — when Britain and France fought Russia — have been superseded by a conflict for our own era. Since 2014, when Russia annexed the peninsula, which had been Ukrainian territory for more than half a century, Crimea has been a focus not only of regional, but of international, tension.

It has again become a flashpoint.

With Russia still holding three Ukrainian vessels and 24 Ukrainian sailors following an incident in the Kerch Strait on November 25th, the situation cast a shadow over this weekend’s G20 summit. President Donald Trump cancelled a planned meeting with his Russian counterpart, Vladimir Putin.  The German Chancellor, Angela Merkel — who did meet Mr Putin at the summit — said that she and he had agreed there should be more talks to resolve the issue.

The Kerch Strait incident has raised fears of wider confrontation between Russia and Ukraine. When Russia annexed Crimea in 2014, the Kremlin had initially denied that any of its forces were involved. Instead, there were suggestions that ‘little green men’ — a reference to the fact that the troops involved wore uniforms without insignia — were behind the takeover. Eventually, even the Russian government’s international broadcast mouthpiece, RT, reported that Russian troops had been involved.

In contrast, Russia has always denied having troops in Eastern Ukraine — where separatist forces are fighting against the Kiev government — although the United States and other western powers have long accused Russia of involvement.

In that sense, this recent incident is a potentially serious escalation: an open and direct confrontation in which the Russian navy fired on Ukrainian vessels.

While the current crisis goes back to 2014, there are deeper historical roots. If these are not discussed in daily diplomatic despatches, they are in the minds of the opposing sides. As neighbours, Russia and Ukraine have a long, shared, history. In recent decades, that has become more complicated. Two dates are perhaps the most significant.

The first is 1954. That year, the Soviet government declared that the Crimea, which had been Russian since the late 1700s, would become Ukrainian territory. In practice, that made little difference. As they were both constituent republics of the Union of Soviet Socialist Republics (USSR), Ukraine and Russia were to a large extent parts of the same country.

That all changed in 1991, when the Soviet Union collapsed. The two countries have spent nearly three decades since trying to define their new relationship. Those Ukrainian governments who have looked westwards towards possible NATO or European Union membership have worried Russian governments wary of western — and therefore possibly in Moscow’s eyes unwelcome — influences.

At stake now are also domestic political considerations: both for Russia and Ukraine. The annexation of Crimea was a populist masterstroke for President Vladimir Putin, and his always solid approval ratings were boosted accordingly. Almost five years on, the picture is different. Analysts pored over a fall in Mr Putin’s ratings reported in August. Unpopular pension reforms were highlighted. Writing for Foreign Affairs in August, Andrei Kolesnikov even offered the view that, ‘the Kremlin will likely try to create some sort of spectacle to distract attention from Russia’s many social problems.’ 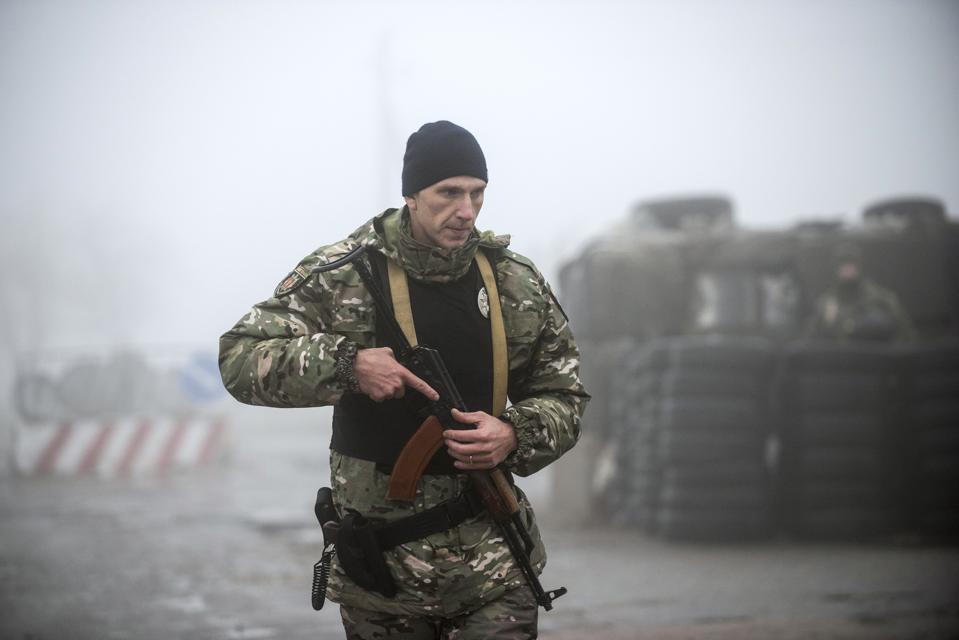 A Ukrainian police officer walks near his position at the checkpoint in Berdyansk, south coast of Azov sea, eastern Ukraine, Tuesday, Nov. 27, 2018. The Ukrainian parliament on Monday adopted a motion by the president to impose martial law for 30 days, something that Ukraine avoided doing even when Russia annexed its Crimean peninsula or sent in clandestine troops and weapons to the war-torn east. (AP Photo/Evgeniy Maloletka)

The Kremlin’s critics would argue that is what we are witnessing now. Ukraine has responded to the crisis by declaring martial law in some regions of the country — but there may also be internal politics at play there, too.

The Ukrainian President, Petro Poroshenko, is due to stand for re-election in March next year. His entire time in office has been overshadowed by the conflict — diplomatic, economic, and military (clandestine or not) — with Russia.

The two countries’ — and the two presidents’ — domestic considerations aside, this is a crisis with international implications, and limited international options. Russia — including individual members of the Russian political elite — is already subject to extensive sanctions. So if western governments decide Moscow is to blame, there is only so much more that they can do. No one wants to risk a wider military confrontation — so international onlookers’ best hope is that this tense situation does not get any worse.