Just days after Iran hawk National Security Advisor John Bolton departed the White House, an unprecedented attack on the Saudi oil facility in Abqaiq and the Khurais oil field took place. Abqaiq is the heart of the Saudi oil system, and while the fire is extinguished, the repairs may take weeks.

Some 6% of global oil production is now shut down, and it is unclear how much will remain offline and for how long as Saudi ARAMCO assesses the damage. Tensions in the Gulf are at a historic high and U.S. prestige is at stake.

This pivotal event may change the history of the Middle East and trigger catastrophic consequences in the region and beyond. So far, Yemen’s Iran-backed Houthi rebels claimed responsibility for the drone strikes, declaring that the attacks would continue. There are also reports that pro-Iranian forces could have launched the suicide drone fleet from Iraq.

Saudi Arabia is the market maker of the world’s oil supply: it pumps an impressive 9.85 million barrels a day (mbd) and exports most of it. Today the United States actually produces more crude than the Kingdom, but as the world’s largest consumer it is a net importer of petroleum products, taking in 3.4 mbd last month. Russia pumps an average of 11 mbd and accounts for 10% of global crude exports.

In terms of Saudi oil supply, Abqaiq is a vital node and the largest crude oil stabilization plant in the world, removing hydrogen sulfide and reducing vapor pressure of some 7 mbd in preparation for tanker export.  Al Qaeda targeted the critical Abqaiq facility with a suicide attack in 2006 but failed to destroy it. The Khurais giant oil field is 127 km long and is the second largest after the adjacent enormous Ghawar oil field. Whoever targeted Khurais, can also strike Ghawar, causing a global energy catastrophe. The repercussions of the attack are dire. Oil is the lifeblood of the Kingdom, accounting for 70% of export revenues and over half of the country’s GDP. The U.S. is a diversified industrial and post-industrial economy. Saudi Arabia, on the other hand, does not export anything but oil, ore, and some dates. Without oil exports it will collapse and die.

The 5.7 million barrels a day outage is the worst single disruption in oil market history, surpassing the loss of Kuwaiti and Iraqi supplies in the early days of the Gulf War, and the loss of Iranian oil output in 1979 during the Islamic Revolution. Monday’s market reaction will be crucial.

If the U.S. oil industry was attacked by rockets and drones from, say, Mexico, with the help of Russia or China, the U.S. would likely to retaliate with overwhelming force. Saudi Arabia has prosecuted a mostly unsuccessful war against the Houthi rebels since 2009, and has an imperative to stop the attacks on its lifeblood.

The U.S. is the key strategic ally of Riyadh. On Saturday, September 14, President Trump has expressed American support to the Kingdom while Secretary of State Mike Pompeo blamed Iran for the attacks.

Trump is no warmonger, however. Before the attack, Trump signaled his willingness to talk to Teheran. He got rid of Bolton, the Iran hawk. But if we use the failed U.S. talks with the Taliban as a guide – which were broken off by Trump after an attack in which one American soldier and several Afghans were killed – Trump’s generous offer to meet with President Rouhani of Iran at the upcoming UNGA is now off the table.

Moreover, there are long term economic and business implications for the attack. Crown Prince Mohammad bin Salman made privatization of Saudi ARAMCO, the largest oil company in the world, his flagship project. Nobody would want to buy shares in a company whose oil fields are on fire or under rocket barrage.

The key questions in the aftermath of the attack are:

The world coasted along at relatively low oil prices for the last several years. This is a boon to lackluster global economy buffeted by the U.S.-China trade war and the resultant economic growth slowdown. There is a chance that damage to Abqaiq can be contained and repaired in a matter of days. We will likely see a brief spike in spot oil prices, but chances are good that Saudi Arabia (and countries like the U.S.) have oil reserves they can draw from to prevent a supply crunch.

If oil prices jump by $5-10 dollars (or less) and then stabilize, there will be no long term impact to the attack. However, if another wave of drone strikes or rocket attacks follows, all bets are off. Saudi production may decline, oil price may go as high as $100/bbl, and each $15/bbl increase would shave off 0.7-1 percent off the global GDP. 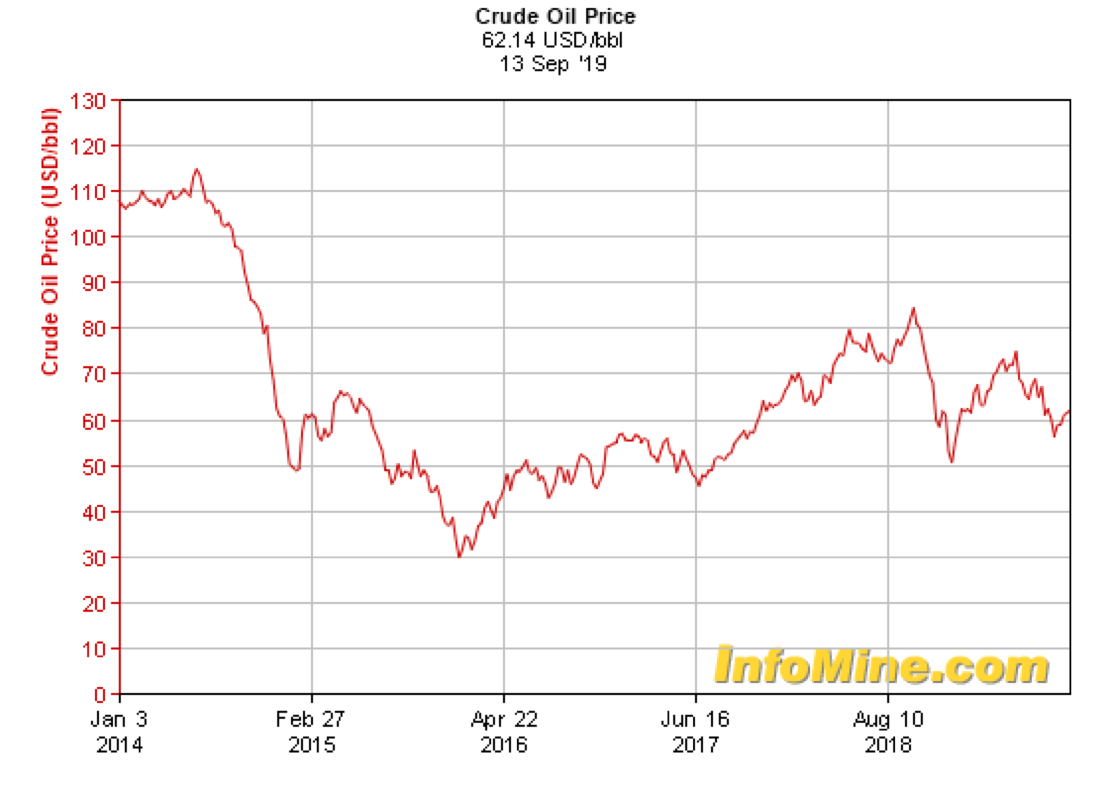 Thus, the regional conflict between the Iran-supported, clan-and faith-based radical Houthi movement and the Kingdom of Saudi Arabia and UAE may catastrophically affect the oil markets and the global and U.S. economy. The Houthis and Iran are also threatening navigation along the vital sea route around Southern Arabian Peninsula and may attack shipping in the Bab-El Mandeb, the southern entry to the Red Sea and the Suez Canal further north.

What the Houthis, who are trying to revive a thousand-year-old Zaidi Emirate in the mountains of Yemen, stand for can be clearly discerned from their movement’ slogan: “God is Great, Death to America, Death to Israel, Damn the Jews, Victory to Islam!” This is conspicuously similar to the Friday prayer cry in Tehran.

Furthermore, a Houthi-Iranian strategy to destroy Saudi production and drive up prices up may have dire repercussions for Trump’s attempts to win presidential re-election in 2019. Here’s why: A number of international parties, including the Iranians and the Chinese, have an interest in a certain outcome of U.S. elections. Democrats are likely to restore President Barack Obama’s Joint Comprehensive Plan Of Action (JCPOA) – the mainstay of his foreign policy legacy, which is in Teheran’s (and Europeans’) interest.

Beijing is getting tired of Trump’s negotiating zig-zags and strategic commitment to box-in the country. China recently announced a massive 280 billion dollar investment in the Iranian ailing energy sector – in direct violation of  U.S. sanctions. It is reasonable to suggest that Iran and China discuss the energy strategy around the Arabian Peninsula and the Gulf.

Hammering Saudi oil production facilities and shutting them down for say three months would cause oil prices to shoot up above $100/bl. This would cause a 1% decline in U.S. GDP, and add an unemployment spike of over 1 million. Nothing would doom Trump’s re-election prospects like an economic recession.

The United States response in defense of global energy security and her key ally – Saudi Arabia – needs to be resolute and fast. It must be multi-pronged, to include military and economic levers. Otherwise, we will allow a major victory to the radical Houthi movement in Yemen and the militant Shi’a Islamist regime in Teheran. This would result in added aggression, which may destabilize the Middle East even further and may require direct American involvement.

First, the U.S. Government has to coordinate internationally a release of Strategic Petroleum Reserves to stabilize oil prices in the $75-85 dollar corridor.

Second, the Pentagon should beef up the naval deployment to the Gulf and the Indian Ocean, and prioritize the disruption of weapons supply lines from Iran to the Houthis. This can be done by providing intelligence to the Saudi and UAE naval assets, or, if necessary, employing the U.S. Navy.

Finally, anti-air, anti-missile, and anti-drone defenses must be beefed up to protect Saudi oil fields and infrastructure.

If this proves insufficient, Washington needs to clarify that Iran cannot win the escalation domination game in this conflict, and Iran’s strategic assets and high-value regime targets, including its nuclear program and the oil export facilities, will be at stake. The U.S. and its allies have an overwhelming air, naval, missile and, if necessary, ground forces superiority in the region.

Nothing less than the future of the global energy supply and America’s economic well-being is at stake.

This article was written by Ariel Cohen from Forbes and was legally licensed through the NewsCred publisher network. Please direct all licensing questions to legal@newscred.com.