The main focus of U.S. defense strategy has shifted from defeating violent extremists—terrorists—to opposing aggression by other great powers. Those other powers are understood to be China and Russia. Pentagon planners now spend much of their time figuring out how to deter Russian adventurism in Europe, and Chinese expansionism in Asia.

The general thinking is that Europe will be mostly an Army-Air Force show, because any Russian military move westward would occur on land, and the only seas close enough to facilitate Navy-Marine Corps participation (the Baltic and Black Seas) would be too dangerous to enter in a major conflict. So Washington is moving to expand the Army’s presence in Poland and the Baltic states while increasing the number of stealthy Air Force and allied F-35 fighters in the region that can support ground operations.

The Western Pacific region around China, on the other hand, is assumed to be mainly a Navy-Marine Corps show. Although the Air Force has a major presence in Guam, Japan and South Korea, and the Army plays a pivotal role in defending South Korea, sea-based forces are deemed a more flexible and survivable way of resisting China’s military moves. Just as the Navy’s role in a European conflict would be limited by geography, so the Army’s role in a region defined by vast expanses of ocean is deemed to be modest—at least, beyond Korea.

This all seems fairly obvious if you look at maps of the two regions. However, maybe it isn’t as obvious as it appears in the case of a Pacific mission for America’s Army. The reason is that both China’s and America’s strategies for the Western Pacific revolve around a series of islands stretching from the Kamchatka Peninsula in the north to the Malay Peninsula in the south. Some of these islands could provide basing opportunities for U.S. Army units equipped to defeat Chinese naval and air forces seeking to traverse the so-called “first island chain” and break out into the Pacific. 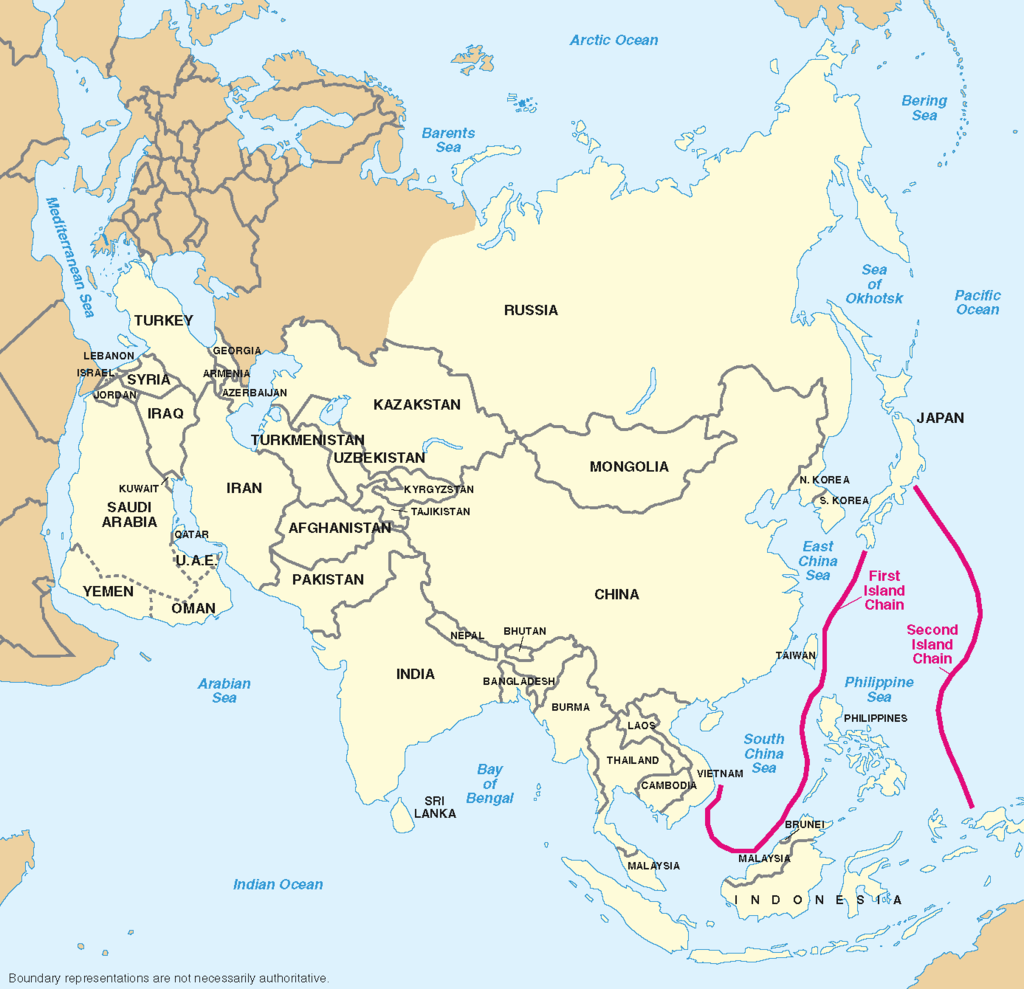 Suitably equipped, these Army units could also help disrupt China’s efforts to secure the seas between the first island chain and the Chinese mainland, a move aimed at denying access to U.S. naval forces. What China wants, first and foremost in any future conflict, is to establish a sanctuary for its forces in the marginal seas along the East Asian coast—a sanctuary where U.S. and allied forces dare not venture. Doing so wouldn’t just protect China, but would assure Beijing’s hegemony over what has become the industrial heartland of the global economy. Japan, South Korea and Taiwan would all lie within its extended military perimeter.

The U.S. Navy and Marine Corps have detailed plans for countering China’s strategy, assuring U.S. access to the region and freedom of navigation for key allies. However, those U.S. plans are shaped by the fact that the Navy and Marine Corps are sea-based. They take advantage of how island barriers are distributed along the Chinese coast, but south of Japan and Korea they make little actual use of places that could support a major presence on land.

That’s where the U.S. Army has a role to play. The active and reserve components of the Army host over four times as many warfighters as the entire Marine Corps, and unlike the Marines, U.S. soldiers are not constantly on call to respond to emergencies in places like North Africa and the Persian Gulf. With only a modest peacetime presence expected for U.S. Army forces in Europe in the years ahead, there are more than enough soldiers available to establish a major land presence in the archipelago of islands near China. Since China has laid claim to much of the South China Sea, Vietnam might also be receptive to a U.S. Army presence.

Of course, this would not be about deploying tank armies or large formations of infantry. It would be about inserting mobile, hard-to-target fires units with weapons capable of threatening valued Chinese assets. Development of long range, precision fires is the top modernization priority of the Army, and it plans to field hypersonic weapon against which Chinese forces have no defense as soon as 2023. There is even talk of a cannon that can accurately hit targets a thousand miles away. In addition, the Army has developed doctrine under the rubric of “multi-domain operations” that would encourage use of joint and national capabilities beyond its institutional boundaries by forward-deployed soldiers.

A second look at the map reveals interesting possibilities. At its narrowest point, the Taiwan Strait is only 81 miles wide, placing numerous targets on the Chinese mainland within reach of Army fires that would be hard to disable in a conflict. Similarly, the distance from the former U.S. base of Danang in Vietnam to China’s southernmost province is less than 200 miles. In fact, the entire South China Sea, containing several Chinses military bases, is less than 900 miles wide at its broadest point. So while the Western Pacific is truly vast, the areas between China and the first island chain are within the range of weapons the U.S. Army is already developing.

Not that the Army would need to rely solely on organic fires like the rapidly evolving Precision Strike Munition. It might be able to adapt the Navy’s Long Range Anti-Ship Missile, a stealthy, extremely accurate munition, for mobile forward deployment against both maritime and land targets. As its concept of multi-domain operations evolves, it will naturally mesh more closely with overhead, sea-based and other assets that can assist in tracking Chinese targets. Networking initiatives are under way that could support cooperative engagement by joint forces including soldiers on land to collapse China’s military capabilities in a conflict.

The Army also operates defensive systems such as the Terminal High Altitude Area Defense and Patriot that can intercept Chinese ballistic missiles. Integrated with U.S. naval systems in the region, the Army defenses would provide an added dimension of protection for all joint and allied force in the area. All that is needed is a deliberate policy to leverage relationships with local nations by deploying suitably-equipped soldiers within range of Chinese military forces.

The Army could thus play a major role in deterring Chinese aggression even as it leads the revitalization of America’s military presence in Europe. It has the manpower, it has the doctrine, and it is rapidly acquiring the weapons to cause big trouble for Chinese forces in a future war. With U.S. naval forces stretched thin in the Western Pacific, making greater use of the Army to counter China’s rise seems like a no-brainer.

tags: featured
previous Russian military orders village evacuation, then cancels it
next A Pair of Female Marines Are Making History in the F-35
Related Posts