On Sunday, chemical weapons investigators arrived in the Syrian city of Douma to examine the scene of a suspected chemical attack that killed dozens of people and injured hundreds more. The United States, France and the UK all blamed the suspected attack on the Assad regime, prompting them to take military action against various regime-controlled installations and chemical weapons facilities near Damascus. The U.S. said 105 missiles were fired in retaliation on Saturday and it believed none were intercepted by Syrian defenses, contrary to Russian claims that 71 were shot down.

Even though the attack on Douma focused global attention on chemical weapons usage in Syria, it was by no means the first such attack in the country’s long civil war. In April 2017, an attack on the town of Khan Shaykhun involving sarin also prompted western military action with the U.S. firing 59 Tomahawk missiles at Shayrat Airbase. While Human Rights Watch has reported 85 chemical attacks in Syria since 2013, the Independent International Commission of Inquiry on the Syrian Arab Republic has confirmed 34 incidents.

26 of those attacks involved or are suspected to have involved chlorine gas while three of them involved sarin. The chemical agent used in a further five attacks could not be identified. U.S. administration officials have said that they suspect both sarin and chlorine were used in the attack on Douma. They claim they have photos and videos showing the remnants of at least two chlorine barrel bombs as well as symptoms consistent with exposure to it. Eyewitnesses have also reported seeing government helicopters over Douma on the day of the attack while doctors and aid organizations reported strong smells of chlorine as well as symptoms consistent with exposure to sarin. 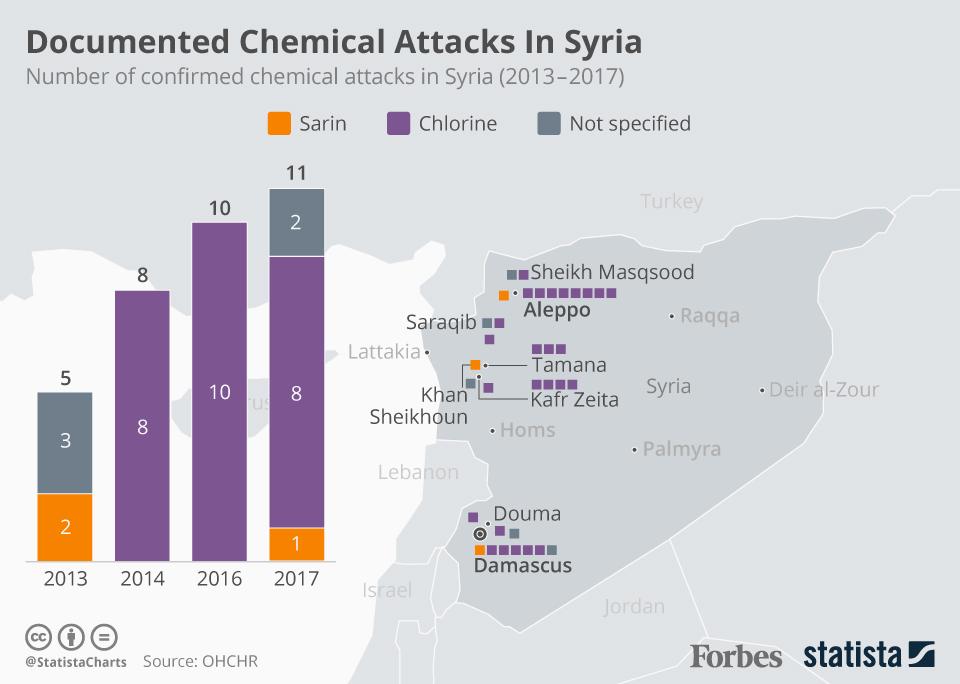 Number of confirmed chemical attacks in Syria from 2013 to 2017.