A Rafale with an ASMPA missile.

MBDA
Every three months, dozens of French air force fighters, tankers and radar planes take off at bases across France, form up over the Atlantic Ocean then split up and practice penetrating air-defenses and dropping nuclear bombs on French soil.

According to the London-based International Institute for Strategic Studies, the latest Poker involves a nuclear assault force including a dozen French air force Rafale fighter-bombers plus three aerial tankers—C-135FRs or A330s—and an E-3 radar plane. The defending forces include eight fighters—either Rafales or Mirage 2000s—plus at least one tanker.

The plan is for the attacking forces from several bases to form up off France’s northwest coast. The tankers will then drag the fighters south to the France-Spain border then east across France to the Mediterranean Sea.

There, the nuclear Rafales will split from the E-3 and tankers, descend to low level and attempt to slip past defending fighters and surface-to-air missile systems before simulating nuclear attacks—most likely by way of 300-mile ASMP-A scramjet cruise missiles.

The weapons will be dummies. French policy bars warplanes from carrying live nukes during peacetime.

The Poker war games usually follow the same basic plan. The duration of the strikers’ sorties—up to four hours—matches the flight time from French bases to western Russia and back. Paris began organizing Poker exercises shortly after forming its airborne nuclear-strike force with Mirage IV bombers and C-135FRs back in 1964.

France’s nuclear force-structure is unique in Europe. Where the United Kingdom deploys all its atomic weapons on submarines, France stubbornly maintains air-deliverable nukes. 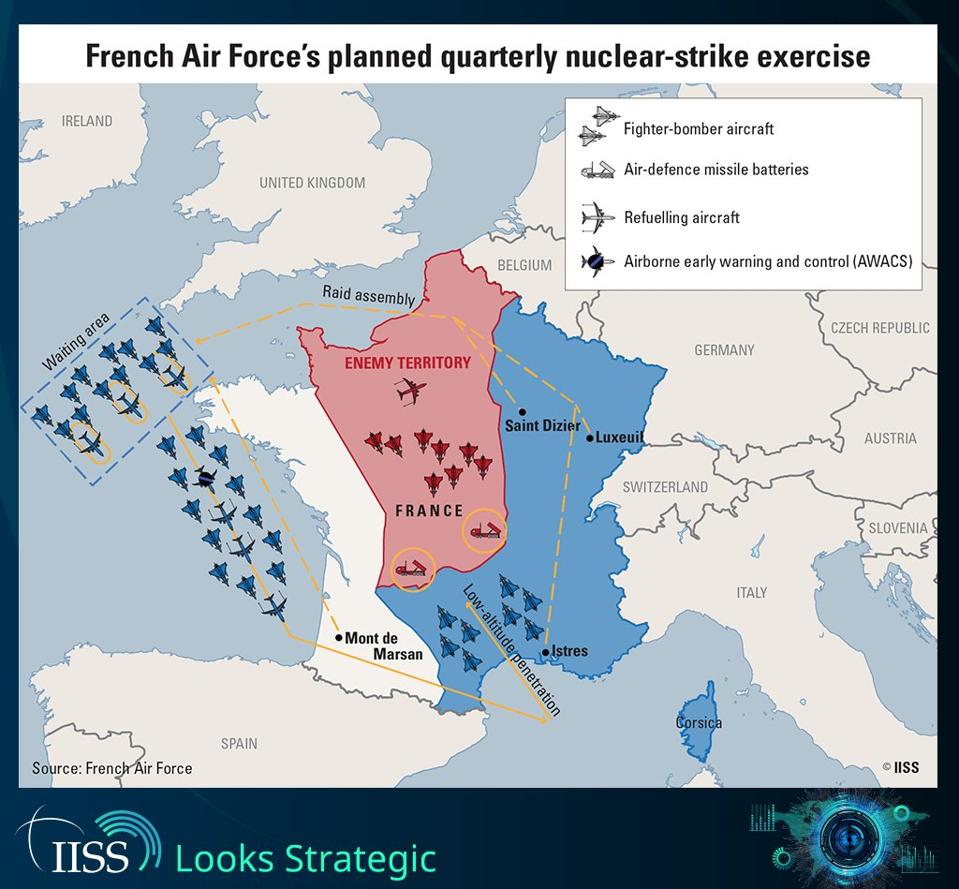 “The airborne component has specific advantages,” the Foundation for Strategic Research in Paris explained in a 2019 study. “The first one is accuracy, which is much better today than that of the sea-based ballistic component.”

“That is the reason why, if it can participate in the full spectrum of nuclear missions, it is particularly valuable either for the exercise of the warning or for a limited and tailored planning.”

In other words, nuclear-armed Rafales gives Paris the option of signaling its intention to wage nuclear war … or conducting limited atomic strikes. All without giving away the location of the more powerfully-armed submarines.

Poker is the mechanism by which the French air force exercises this particular atomic muscle. But there’s also a diplomatic component.

As the United States under President Donald Trump began to pull back from international alliances while also ramping up its production of new, and provocative, types of nuclear weapons, French President Emmanuel Macron began engaging in a kind of atomic diplomacy.

America’s European allies once could count on American nukes for deterrence. Macron and his administration have urged them to look to France, instead. The French government rarely announces the Poker war games, but it made an exception in February 2019. “We Europeans cannot remain spectators of our own security,” defense minister Florence Parly said.

“France’s vital interests now have a European dimension,” Macron said this February. He invited France’s European allies to join in the French military’s nuclear war games, presumably including the Poker exercises. “European partners who want to do so will be able to be associated to French deterrence forces’ war games,” Macron said.

It’s unclear what exactly this might mean. It’s also unclear whether any countries have accepted Macron’s invitation.

But the offer stands—and the opportunities are plenty. France pretends to nuke itself four times a year, and it shows no sign of stopping.

tags: featured
previous Pompeo says Afghan negotiations likely to be 'contentious'
next She Once Was Barred from Fighter Jets. Now She’s the Pentagon’s Only Female Four-Star
Related Posts