In the eternal competition between offense and defense for military dominance, the offense is winning. Russia has been testing a hypersonic cruise missile with a speed above 6,000 miles per hour that can be used to deliver nuclear or conventional warheads against targets at sea or on land. The U.S. military at present has no defense against the weapon.

U.S. intelligence expects the missile, called Zircon, to be deployed on Russian warships in the near future. Meanwhile, Russia is testing a second hypersonic weapon, a glide vehicle boosted to speeds in excess of a mile per second by a ballistic missile, that is expected to carry a nuclear warhead over intercontinental distances. China has similar research under way, and has tested its own hypersonic system within the last year.

So a technology that the Pentagon until recently considered mainly a boon to the firepower of the joint force is now rapidly turning into the biggest military threat of the Trump era. It isn’t hard to see what makes hypersonic weapons so worrisome. Aside from their high velocity—five times the speed of sound or greater—they operate almost entirely within the atmosphere, at elevations below which existing early-warning sensors are optimized to monitor.

And they maneuver, so that unlike the parabolic trajectory of a ballistic missile, their flight path and target cannot be predicted. As if all that were not enough, the super-heated plasma that surrounds a missile traveling at over a mile per second through the atmosphere tends to absorb radio waves, so the weapons might be invisible to radar. Only infrared sensors will work, and the current U.S. overhead architecture isn’t designed to track heat-emitting threats continuously throughout their flight so that an effective defense can be mounted. 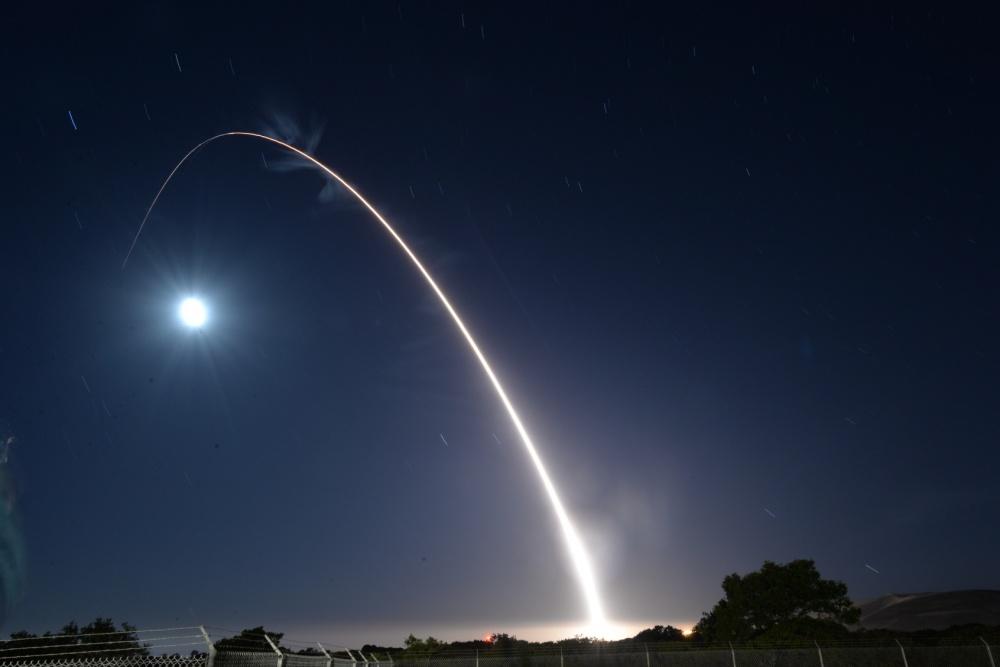 Long-range ballistic missiles achieve speeds even higher than planned hypersonic weapons, but as this image illustrates, ballistic flight paths are easier to analyze and anticipate.

Not that suitable interceptors exist anyway. Lockheed Martin, a leader in missile defense technology, says that existing systems for intercepting ballistic threats can be evolved to cope with hypersonic attacks, but the money to do so hasn’t been budgeted, and the sensor constellation needed to track such threats hasn’t progressed much beyond the PowerPoint stage. So Michael Griffin, the Pentagon’s top technologist, figures the U.S. won’t be deploying a “counter-hypersonic” defense anytime before the mid-2020s. By then, hypersonic weapons could be everywhere on the modern battlefield.

It’s a reflection of how fast concern about hypersonic attacks has grown that the Pentagon’s Missile Defense Agency says counter-hypersonic research is its biggest unfunded priority in 2020. In other words, the agency devoted little of its funding request to defeating hypersonic weapons when its budget was put together a year ago, and then realized later it needed a lot more money to get moving on what suddenly looked to be an urgent requirement. The actual funding request for 2020 was $157 million—a rounding error by Pentagon standards—but now the Missile Defense Agency says it would like $719 million more to fund projects aimed at upgrading existing defenses and developing more futuristic responses.

The most pressing requirement is for a Space Sensor Layer in low-earth orbit that can track hypersonic threats from birth to death. Military planners realized a generation ago that if they were ever going to construct an effective defense against long-range ballistic missiles, they needed such a constellation. But policymakers decided not to defend against the threat posed by Russian and Chinese nuclear arsenals—arms control looked more promising—and the path of ballistic trajectories was relatively easy to predict without “midcourse” tracking, so the low-earth constellation never got built. 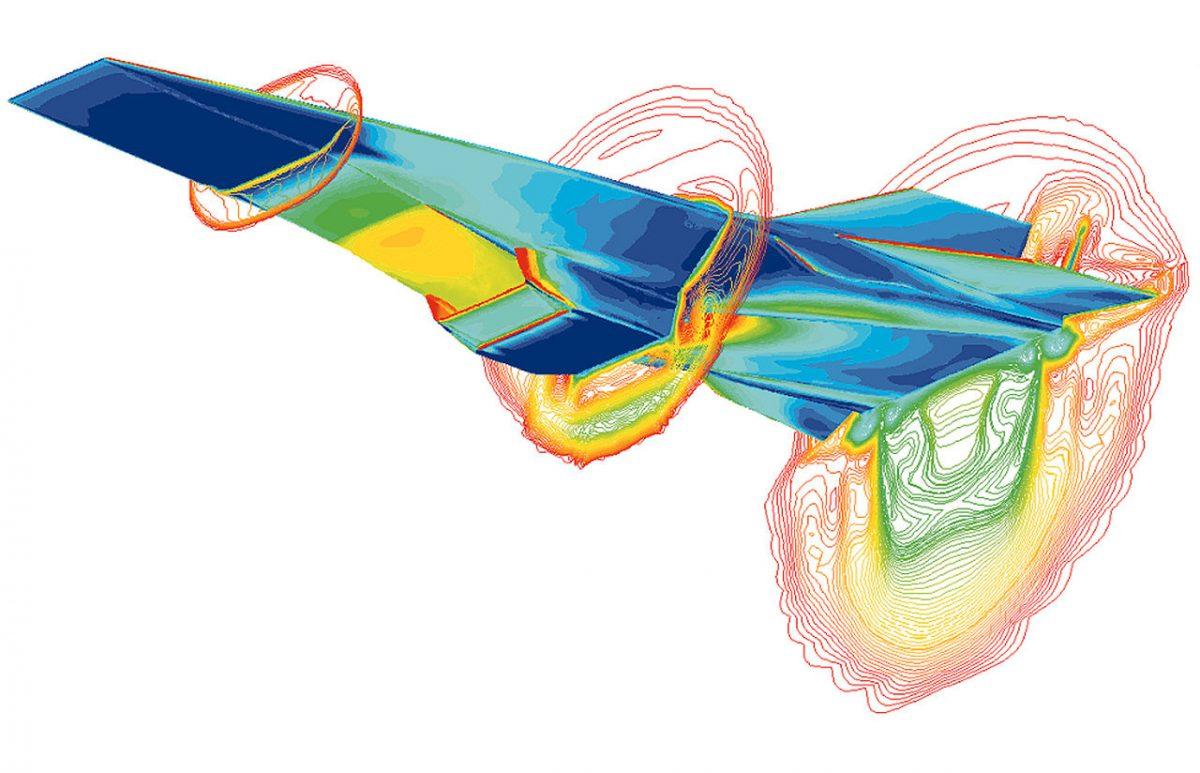 Hypersonic concepts have been around for decades, as this 1996 NASA graphic of computational fluid dynamics demonstrates. What’s new is that now several great powers are preparing to weaponize the technology.

Now the need is all too clear. Not only are Russia and China investing in a new generation of weapons aimed at negating America’s huge investment in strategic systems, but their emerging hypersonic weapons will be too maneuverable to make reliable guesses about where they are headed. In the compressed timeframe commanders will have to respond against weapons approaching at a speed of nearly two miles per second, they must have immediate and detailed data on precisely what paths the attackers are taking. Otherwise, defense will be essentially impossible.

So the Air Force, working on behalf of the Missile Defense Agency, has awarded small contracts to nine industry teams conceptualizing what the first phase of a Space Sensor Layer should look like. Several of the team leaders—Boeing, Lockheed Martin, Raytheon—contribute to my think tank. Whoever prevails will need to explain not only how the low-earth constellation can continuously track hypersonic threats, but also how it will fit into a next-generation overhead architecture of infrared sensors for tracking ballistic, hypersonic and other dangers.

Unlike traditional missile-warning satellites, which typically consist of a handful of spacecraft parked in geostationary and polar orbits, the low-earth-orbit constellation required for hypersonic defense will require a much larger number of birds. At least dozens it seems, and potentially far more depending on where planners think hypersonic threats might originate. If China deploys hypersonic anti-ship weapons along its coast to counter the U.S. Pacific Fleet, scores of satellites might be needed just to cover that one region.

And that’s just the beginning. The Navy and other friendly forces will need a new generation of interceptor missiles (assuming no other kill mechanism is devised). They will need a resilient battle management system that is completely automated, given the very short timelines in which responses must be mounted. And they will need a flexible, survivable communications network for integrating the diverse defensive assets of the joint force. Even if all these items are fielded expeditiously, hypersonic weapons present a major threat to America’s military dominance in the Western Pacific and elsewhere.

Work is already underway, although much of it is secret. Raytheon CEO Tom Kennedy noted during last week’s stellar earnings call that all four of his company’s business units were engaged in various aspects of counter-hypersonic research. He said the market for defenses against hypersonic attack looked likely to be bigger than the market for hypersonic offensive weapons, because it required innovations across the entire “kill chain” from initial detection to interception. The mission is so demanding that it will require numerous projects spanning multiple decades, and meanwhile the threat will not be standing still.